Surely when you think of Indian food the first thing that comes into your mind is spices, spicy taste or vegetables. And you are not really going the wrong way. However, in the best Indian restaurant in Malaga you will discover much more. Indian cuisine has been very influenced throughout history and this has resulted in a cuisine full of colours, textures and intense flavours.

Indian cuisine has different styles depending on its regions. It is a noteworthy fact that the cooking ways of the southern regions of the country is more suitable for those who have a vegetarian diet. Also in southern India, coconut is considered a very important ingredient in food. Indian cuisine throughout history has been influenced mainly by Muslim and Hindu traditions, although English, Portuguese and Persian ones also influenced its gastronomy in aspects of its cuisine, because they were colonizers of the country. Despite this in Indian cuisine in general, it is typical that the dishes are accompanied with Indian breads or rice, and garnished with selected Indian spices. The fact that Indian dishes have incorporated condiments and aromatic herbs give them a great medical value, to the point of being considered prolongers of life.

If we talk about one of the most used spices in Indian cuisine, we talk about curry. Curry is composed of a mixture of nutmeg, poppy seed, ginger, cardamom, coriander, saffron and clove. In addition, you must know that apart from the aforementioned, the term curry is also used to speak generally of a dish. Indian cuisine is a cuisine which has spread all over the world, but it is worth mentioning more so in the United Kingdom. In the past, British officers returning from Indian colonies had greatly spread Indian cuisine, opening even restaurants where their main attraction was to offer exotic dishes.

At Amigos Express we offer the very best food in pure Indian style. Discover the wonders of Indian cuisine in the best Indian restaurant in Malaga.

We expect to see you soon!

Indian cuisine in Malaga has become one of the most popular and requested cuisines. Their… 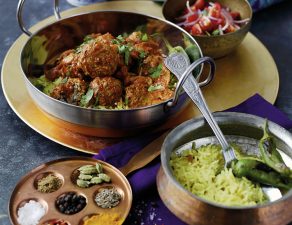 The great diversity of cultures that have colonized India has greatly enriched its gastronomy. Indian…